I don’t know about where you live but it is HOT here in Florida.  I am having to shoot earlier and earlier just so I can get through it relatively comfortably.  The past two months have flown by with tournaments, finals and now training for Ohio!

This might have been my favorite tournament so far only because I didn’t have to travel far and I got to meet one of my Tumblr friends, @juliaarchery !

I got my highest score so far so it felt good to finally be going back up after so many changes. 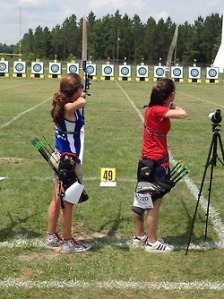 This tournament had a lot of wind like Arizona!  I kept feeling weird about my form because I am working on some changes and it took me a while to get into a rhythm.  On one shot I had a miss because of some weird thing I did in my release and it cost me points I REALLY wanted.  With all my difficulties, I managed to keep my score about where I was before so I know, in theory, I am progressing.

I also got an Instagram and took my first end of tournament selfie with my target friends.  Archery is so awesome.  🙂

So now I am working on everything and I went down to a lower poundage and up into a better arrow/vane combination for me (I think.)  One of the things I have learned in the past couple of years is that what works for one person may not be what works for you.  It’s a big learning curve because you may think you are doing fine and then you learn more stuff and its like BAM!  I wish I had known everything I know now when I first started!

Looking forward to seeing you guys in Ohio and Texas.  Who is going?

1 thought on “June Round Up”